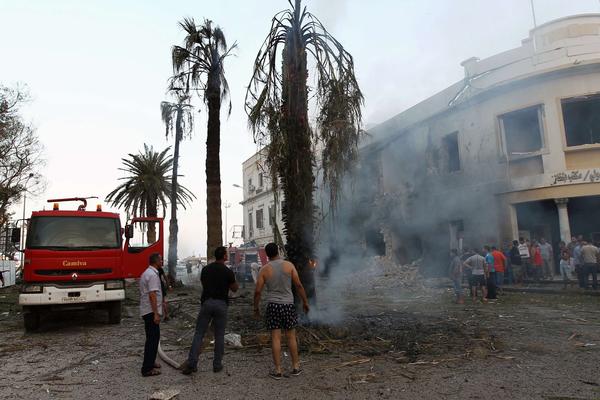 Gunmen stormed the Russian Embassy in Tripoli, the Libyan capital,  on Wednesday night, scrambling over the walls of the compound, tearing down the Russian flag and opening fire on cars and buildings, Russian and Libyan news agencies reported.

The attack was suspected to be revenge for the killing a day earlier of a Libyan air force pilot by a Russian woman, who the gunmen thought had taken refuge in the diplomatic mission, the ITAR-TASS news agency reported. „The Wednesday attack may be linked with the incident on Tuesday,“ in which local media reported that a Russian woman — some identified her as Ukrainian — shot and killed Libyan air force officer Mohammed Susi in Tripoli, then attacked the pilot’s elderly mother with a knife, ITAR-TASS reported. The Russian news agency, citing local security sources and the Libyan news agency LANA, said the woman had not been identified, nor was a motive in the attacks known. “There has been an incident in Tripoli tonight, in which there was shelling and attempts to enter the territory“ of the Russian Embassy, Russian Foreign Ministry spokesman Aleksandr Lukashevich was quoted as saying by Russia Today.

At least 10 gunmen arrived in two vehicles and opened fire on an embassy car parked outside the compound, then scaled the walls to enter the courtyard, ITAR-TASS reported, citing local witnesses. The intruders tore down the Russian flag from a balcony, then opened fire on the building, the agency said. No injuries were reported, and the attackers fled as soon as Libyan security forces arrived, the news reports said. The situation at the compound was said by Voice of Russia radio to be calm, although extensive damage to the main building was reported. The embassy was attacked in February 2012 by protesters angered by Russia’s thwarting of a U.N. Security Council effort to censure Syrian President Bashar Assad for excesses against rebels who have been fighting to oust him since March 2011.

The U.S. mission in Benghazi was attacked by militants Sept. 11, 2012, and U.S. Ambassador J. Christopher Stevens and three other Americans were killed by radical Islamists. An Italian consulate car came under fire in January in Benghazi, and in April a car bomb that detonated outside the French Embassy in Tripoli wounded a French security officer and a Libyan passerby. Libya has been wracked by violence and instability since the capture and killing of longtime strongman Moammar Kadafi two years ago.  Russia Today attributed the latest attack on a diplomatic venue to the lawlessness that has prevailed since Kadafi’s toppling. „We’ve seen in Libya the mob rule of countless militias and death squads,“ Russia Today quoted activist Sukant Chandan as saying. „Two years after the victory of the so-called February 17 revolution and the end of the civil war, which resulted in the toppling and assassination of [Kadafi], new Libyan authorities turned out to be unable to establish order despite all attempts,“ ITAR-TASS said. Russia had fiercely opposed the U.S.-led campaign to oust Kadafi, a longtime ally of the Kremlin, and warned that toppling the eccentric dictator would lead to anarchy and a power vacuum. For the record, 9:25 p.m. Oct. 2: A previous version of this post said gunmen stormed the Russian consulate in Benghazi, Libya, instead of the embassy in Tripoli. {Quelle: www.latimes.com}