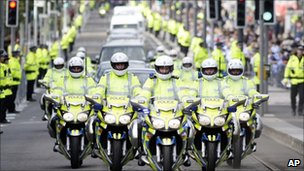 He came, he saw and he conquered a nation

About 200,000 people turned out to welcome Pope Benedict XVI to Scotland, dramatically confounding low expectations for the start of his four-day state visit to the UK.

The pontiff flew out of Glasgow last night “very happy” after a sun-filled day when an estimated 125,000 people greeted him on the streets of Edinburgh and 70,000 pilgrims joined him for Mass in Bellahouston Park. Father Frederico Lombardi, official spokesman for the Pope, said after almost 10 hours spent on Scottish soil: “Today has been absolutely wonderful, more than we could ever have expected. The Pope is very happy and we are delighted to have such a wonderful start to this visit”. The visit began at 10.17am when he emerged from his Alitalia jet at Edinburgh Airport and went to the Palace of Holyroodhouse for an official reception with the Queen, senior churchmen and politicians, before taking to Princes Street in his Popemobile, bedecked in a tartan scarf.

Just before 5pm he arrived at Bellahouston, where a vast section of the park was turned into a sea of white-and-yellow Vatican flags, waved alongside the Saltire, the Lion Rampant, and the Irish Tricolour. People of all ages waited for up to seven hours for the pontiff to arrive. After being officially received by Gordon Matheson, leader of Glasgow City Council, and Lord Provost Bob Winter, he again took to the Popemobile to make a 15-minute tour, to unbridled cheering from the crowds. Mr Matheson, who is Catholic, said he had been left “giddy” after meeting Pope Benedict in Edinburgh alongside the Queen. His delight intensified after coming back to Glasgow. He said: “I am elated, genuinely, to have had the honour of meeting the Pope this morning and it is overwhelming then to be able to come to my home city and see it looking so magnificent. The whole day is running like a Swiss watch and the atmosphere is so joyous. This is a massive event worldwide and I am so proud of what we have achieved here”.

Peter Kearney, spokesman for the Catholic Church, said Scotland had excelled itself in the reception it had given. “Scotland has set the bar extremely high for this papal visit. The sun shone, the crowds were singing and cheering, and Scotland presented an especially welcoming face to the Pope and indeed the world”. He said claims that the visit of Pope Benedict would not generate the same reception as his predecessor, John Paul II, in 1982 had been rendered irrelevant by the turnout. “I think today saw an explosion of enthusiasm which has really made all the negativity irrelevant. It has dramatically exceeded expectation. In Edinburgh, we had around five times the number of people who came to see the Pope in the capital in 1982”.

The Pope also touched on the 1982 visit during his homily in Glasgow. He said: “It is with some emotion that I address you, not far from the spot where my beloved predecessor Pope John Paul II celebrated Mass nearly 30 years ago with you and was welcomed by the largest crowd ever gathered in Scottish history”. Despite the sizeable gatherings in both cities, there was little sign of trouble. At Bellahouston, despite concerns about pilgrims’ welfare, problems for the Scottish Ambulance Service and the Red Cross were limited to treatment for about 170 people with a range of minor complaints, from blisters to sprained ankles and wasp stings. No-one was taken to hospital. Police leaders also hailed a successful day, involving 1600 officers in a massive security operation that swept from the capital along the M8 to Bellahouston, and ended when the Pope’s flight left Glasgow Airport just before 8pm.

Strathclyde Assistant Chief Constable Fiona Taylor said: “This has been a hugely complex operation that has involved agencies from across the public and private sector and has been months in the planning. I am pleased to say that, at this stage, it looks as though it has been a resounding success. “The papal visit has shown, yet again, just how well equipped this city is to host global events. It was another opportunity for every part of Glasgow to demonstrate our ability to work collectively in the run-up to the 2014 Commonwealth Games. I am pleased to say that Glasgow and Scotland has once again risen to the occasion”. However, the day was not just about wide-scale participation – there were important messages too.

In his opening speech in Edinburgh, Pope Benedict praised the UK as a “force for good”, but also warned about “aggressive forms of secularism”, and urged the nation not to lose its traditional values. After he was officially welcomed by the Queen at the Palace of Holyroodhouse, the Pope spoke of the UK’s important place in history. He said: “Your forefathers’ respect for truth and justice, for mercy and charity, come to you from a faith that remains a mighty force for good in your kingdom, to the great benefit of Christians and non-Christians alike”. Referring to the future, he delivered an apparent warning about the risks to the nation’s traditional values. He said: “Today, the United Kingdom strives to be a modern and multicultural society. In this challenging enterprise, may it always maintain its respect for those traditional values and cultural expressions that more aggressive forms of secularism no longer value or even tolerate”. The first state visit to Britain by a Pope came amid renewed anger at the worldwide child abuse scandal that has engulfed the Catholic Church and dogged the Pope’s own religious career.

As he flew to Scotland, the Pope spoke of his sadness over his church’s handling of child abuse scandals. He said abusive priests had not been dealt with decisively or quickly enough. The Pope’s comments, to reporters on board his plane, marked his most thorough admission to date of failings in the way the scandal was handled. The concession came before a new survey published last night showed one-quarter of British people think the Pope should resign over the abuse of children by priests. The ComRes poll, commissioned by CNN, found that three out of four adults in the UK think the Pope has not done enough to punish those guilty of abuse and that the Church has shown insufficient remorse. Two-thirds of Catholics surveyed agreed. {Quelle: Schottische Herald – 17 Sep 2010 Stuart Miller and Paul Ward}